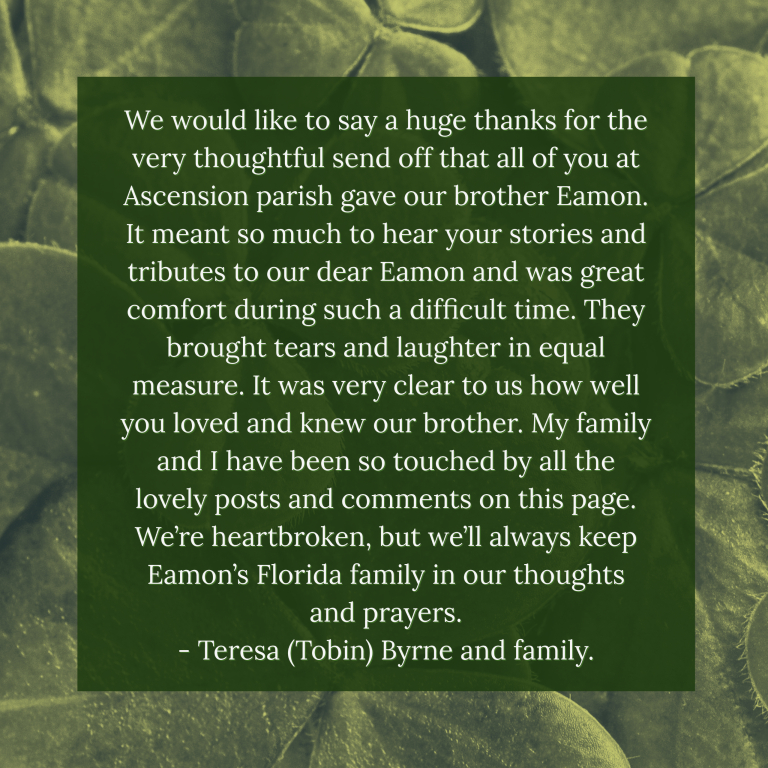 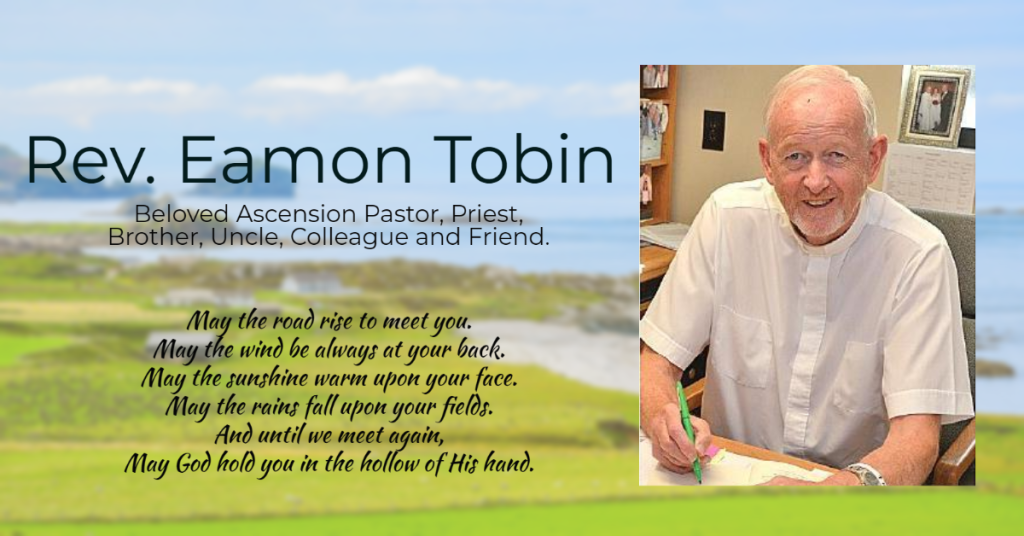 Please pray for the repose of the soul of Father Eamon J. Tobin.

Father Edmund (Eamon) J. Tobin was born May 21, 1947 in Dublin to Edward and Johanna Tobin, one of five children. He was raised and attended school in Killahy, Tullaroan, County Kilkenny.  He was interested early on in serving on mission in the United States.  He attended St. Kieran’s College, Kilkenny, and was ordained on June 11, 1972 for the Diocese of Orlando.

When he was serving at Our Saviour Parish in Cocoa Beach, he commented on the nomadic life of the religious Sisters of Mercy who served within the Diocese of Orlando and other areas, including their homeland, Ireland.  As they traveled back and forth, he said, “All this shifting and moving began with the call to Abraham.  It was the same call that went to St. Patrick.”  Father Tobin also responded to that call throughout his priesthood.

Mentioning St. Patrick was not a casual comment, either.  The prayer of St. Patrick’s Breastplate had from his childhood been important to Father Tobin, and he included a portion of it in the preface to his book on prayer:

He embraced the Gospel message, teaching and living these words, “Go, therefore, and make disciples of all nations, baptizing them in the name of the Father, and of the Son, and of the holy Spirit, teaching them to observe all that I have commanded you (Matthew 28:20).”

In that light of God, he was appointed Diocesan Coordinator for the Charismatic Renewal movement by Bishop Thomas Grady in 1975 and served in this role until 1987. He was instrumental in encouraging the spiritual growth and prayer life of Catholics throughout the Diocese of Orlando, and presented numerous programs and retreats over the years on these topics.   People still recall his tone of evangelization and love of the Lord.

Compassion and mercy of the Lord was the soul of Father Tobin as he served parishioners of all ages throughout his priesthood, and for the people of God everywhere. He maintained outreach programs to the poor, the sick, the bereaved, and was active in inviting non-practicing Catholics back to Mass. He was dedicated to respecting the life of the unborn. He believed in the importance of missionary work. He was beloved by the people of the Sister Diocese of San Juan de la Maguana as he and parishioners provided financial support for the building of a modern bridge as part of a road building project.  He saw the needs of people throughout the world and most recently, in the summer of 2019, he and 8 parishioners joined Blessed Trinity Parish (Ocala) staff and parishioners on a mission trip to Uganda. He actively supported mission trips for youth to third world areas as he felt that “a mission trip like this for young people can touch their hearts more than just years of religious education. Invariably it has a profound impact on their lives.”

He was a Third Degree member of the Knights of Columbus.

Father Tobin connected with children, parents, catechists and faculty in encouraging learning and spiritual development. He helped them to understand the bond between the Gospels and everyday life, understanding the Sacraments and particularly the extraordinary gift of the Eucharist.  From the Eucharist, he taught families to embrace an active prayer life through the classrooms in the Catholic schools in the parishes where he served, and in youth and adult faith formation classes.

Fr. Tobin was a prolific writer and authored books, articles and commentaries on topics close to his heart: praying, forgiveness, the Sacraments, the Catechism of the Catholic Church, Sunday Mass readings, the rosary, dealing with death, fear and guilt.

In celebrating his 25th jubilee year of priestly life, Father Tobin, said that the priesthood “has been a wonderful opportunity to touch people's lives. The parish priest is privileged to be a positive sacred presence in people's lives when a child or adult is Baptized, receives First Communion, Reconciliation and Confirmation, is sick, dying or celebrating Matrimony or special anniversaries. Other times, and especially on Sundays, we have a unique opportunity to share God's Word and wisdom with thousands of people. I am very grateful to have been called to such a noble profession.”

As he helped form the domestic Church throughout his priesthood, Father Tobin’s own family was very important to him and he went home to visit each summer.  He is survived by his brothers and sisters Mary (Morrissey), Paddy, Martin, Teresa (Byrne) and their families including 16 nieces and nephews, and 14 grand nieces and nephews. His niece Maeve is also his Godchild.  His sister, Teresa, comments, “We all looked forward to seeing him each summer and have wonderful memories of our time together.”

Father Tobin is also survived by his parish community of Ascension Catholic Church and School, the religious and clergy who have come to know him these many years.  We praise God for this shepherd, who walked humbly with us, bringing forth God’s Light.

Public Services will be held at Ascension Catholic Church, 2950 N. Harbor City Blvd., Melbourne and will follow Diocesan protocols during this Pandemic, including mask wearing and social distancing.

The Funeral Mass will also be livestreamed for those who wish to participate and cannot attend.

Father Eamon Tobin was born on May 21, 1947 in Dublin, Ireland.  He is predeceased by his parents, Joanna (nee Brennan) and Edward.  He has two brothers and two sisters.  He is known as a shepherd of God’s people, a spiritual director and a man of prayer.  He died in his home today as he readied to watch the Notre Dame football game.  He was known for his spirit of evangelization and his care for the people these many years.

He served as associate pastor at St. James Cathedral; St. Joseph Catholic Church, Winter Haven; St. Mary Magdalen Catholic Church, Altamonte Springs; and St. Teresa Catholic Church, Titusville.  He served as pastor of Church of Our Savior, Cocoa Beach before his appointment as pastor of Ascension Catholic Church in September 2001.  He was devoted to social outreach and supported the Diocese of Orlando Sister Diocese, most recently assisting with the financial costs of bridge building in the Diocese of San Juan de la Maguana.  He  became well known for his prolific writing about prayer and offered many workshops, lectures and retreats on prayer and spirituality.  He is praised for his service to the universal Church by those who have accessed his writings and books on prayer and spirituality.

More information on his life and priesthood and funeral arrangements will be forthcoming in the next week.

Eternal rest grant unto him, O Lord, and let perpetual light shine upon him.
May the souls of all the faithful departed, through the mercy of God, rest in peace. 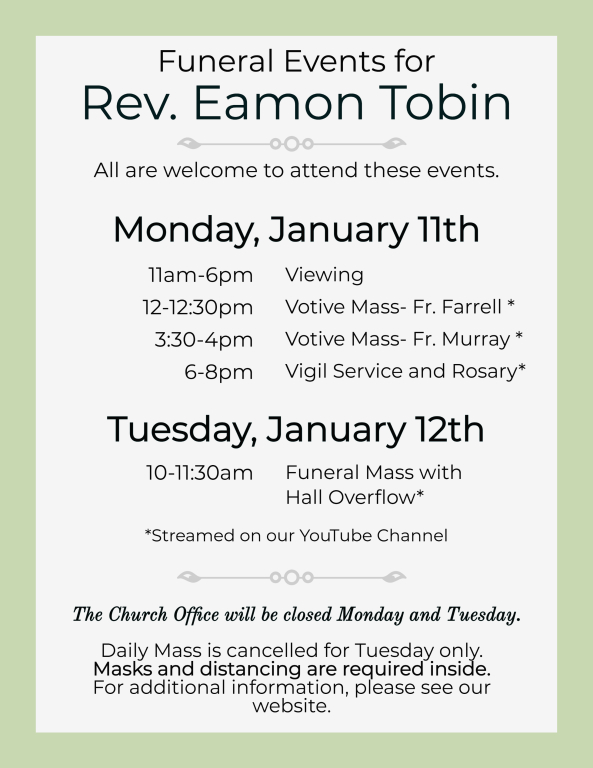